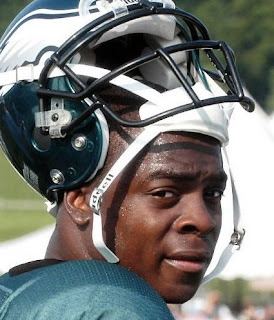 The news puts to rest growing speculation that Jeremy Maclin wouldn’t be able to play in 2011 due to a mysterious illness he has been battling, which showed up after the two-year veteran lost 15 pounds this past offseason due to mononucleosis.*

Maclin has batteled mononucleosis and lost 15 pounds this spring. This report is certainly encouraging news and inline with the statements that Joe banner and Andy Reid made last week.

As for the rumor mill reports stating that Maclin’s illness could be life threatening, it doesn’t appear that way.

No so, said Andre Maclin: “They kind of have us on a gag order until tomorrow. … But he’s fine, he’s fine. That much I can say.”
Asked if he expects Maclin to play for the Eagles this season, the brother said, “I’m confident about that as well.”

We’re happy to hear that the situation appears to be much less severe than some originally thought. I wish you all the best. (http://www.nationalfootballpost.com)

* Mononucleosis is a viral infection causing fever, sore throat, and swollen lymph glands, especially in the neck. Mononucleosis, or mono, is often spread by saliva and close contact. It is known as “the kissing disease,” and occurs most often in those age 15 to 17. However, the infection may develop at any age. Mono is usually linked to the Epstein-Barr virus (EBV), but can also be caused by other organisms such as cytomegalovirus. (http://www.ncbi.nlm.nih.gov)